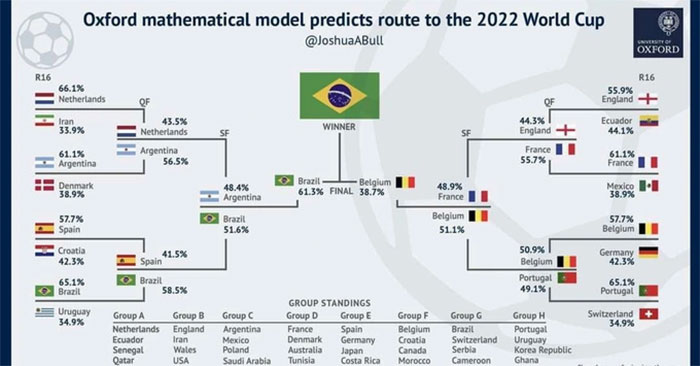 An AI model from the Alan Turing Institute (UK) ran 100,000 simulations to predict the outcome of the 2022 World Cup. This AI result predicts Brazil has a 25% chance of winning and is the strongest candidate for the World Cup. World Cup championship 2022. In this AI list, after Brazil are Belgium ((18.9%), Argentina (13.2%), France (11%), England, Spain, Netherlands, Denmark, Portugal and Croatia are in the next positions respectively.

To make the predictions, the team used the compiled dataset of GitHub user martj42, which shows the results and statistics of every international match since 1872.

In its data, the group that gives the most weight to World Cup matches, places more weight on recent matches and feeds the official FIFA rankings into the model.

The team also emphasized that factors that could skew results such as weather, time zone adjustments and individual player stellar performance were not included in the model.

Having the same prediction is the artificial intelligence built by Joshua Bull, Professor of Mathematics at the University of Oxford (UK) and colleagues. This software has relied on many factors such as FIFA rankings, average age of players, how many players of the national team play together in a club, the population of each country … to calculate predict the team will win the World Cup 2022. This AI predicts Belgium and Brazil will meet in the final and the victory belongs to Brazil.

This artificial intelligence software also predicts the positions of the teams after the qualifiers are over and the results of the knockout matches.

Game company Electronic Arts (EA) – famous for the FIFA football game series, has also built an artificial intelligence software that predicts the final of the World Cup 2022. According to this AI, the final will be a “war”. between Argentina and Portugal. As a result, Messi and his teammates will raise the championship trophy at this year’s tournament.

Of course, all of this is just a prediction and the ball always has many interesting surprises that no one can expect. If you do not know, at the 2018 World Cup, the artificial intelligence software wrongly predicted the team that would win the championship.