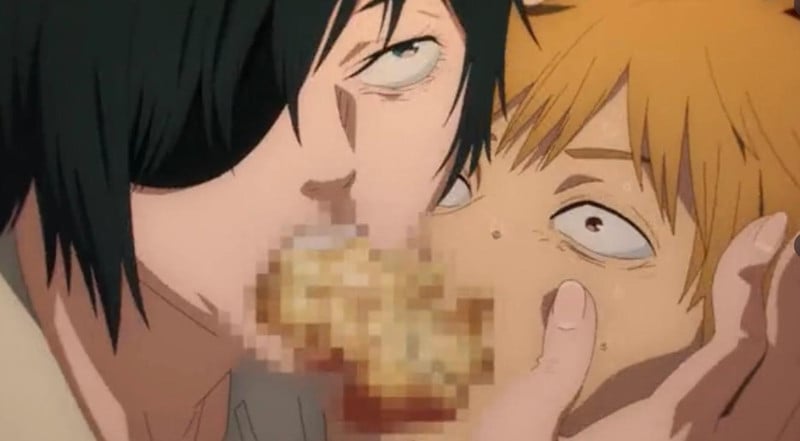 Despite promising not to hide any details, MAPPA still had to blur a scene in the anime Chainsaw Man episode 7. The scene that CSM fans loved the most soon after became extremely hot because “luckily it was censored” !

In episode 7, Denji threw himself into the Infinite Demon and fought it for days on end. Thanks to constantly absorbing blood from the demon, Denji is like Xiao Chao Meng’s Aatrox: every Q hit is full of blood, can’t die!

Faced with Denji’s stubbornness, the Infinite Demon surrendered. The demon hunters escaped from the apartment building safely. Himeno then invites everyone to drink together to get to know each other.

That evening, Himeno and Aki had a drink with Makima. As a result, Himeno got drunk on his fishing rod and could no longer control himself. She rushed in to kiss Denji. It was ok at first, but after a while Himeno threw up everything in Denji’s mouth! This is also one of the most impressive scenes that Saw Man fans have always been waiting for!

See more: Why do Chainsaw Man anime and manga fans bark when they see Makima?

Before CSM aired, MAPPA once affirmed that they would not cover any scenes so that the audience could have the best experience. However, in the scene where Himeno vomits, we can see that the film has blurred out what comes out of Himeno’s mouth. Why not cover it?

Many fans were also surprised that the movie had censored scenes. However, with what is “enjoyed” in the original manga, the audience is extremely happy because they do not have to see the FullHD + vomit of the beautiful sister Himeno.

It’s been a long time since I’ve felt grateful for censorship.

That scene was disgusting, watching the full movie must have stopped eating.

I had high expectations for this episode’s ED, but after watching the content, every time I listen to the music, I’m reminded of Himeno’s vomit.

That scene was really funny! The best quality vomit I’ve ever seen in an anime.

How do you feel about Himeno and Denji’s vomiting scene in Chainsaw Man episode 7? Do you feel lucky that the movie was censored? Please leave a comment so we can chat together.

See more: List of all demons in the manga, anime Chainsaw Man (Part 3)