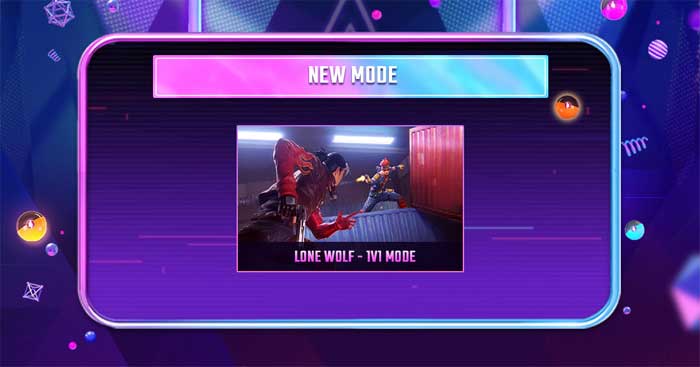 Garena Free Fire finally has a 1vs1 mode called Lone Wolf. Let’s find out with Download.vn how to play Lone Wolf mode in Free Fire Please!

Free Fire is released by Garena with many periodic updates. After each update, Free Fire is improved and has more new content, including game modes. Lone Wolf is one of them, added to the game from FF OB31.

Lone Wolf Mode in Free Fire where you can participate in duels on the Iron Cage map. This new map is a small warehouse, containing many crates. Players will appear on each side of this warehouse.

At the start of the round, each player will have 2 Gloo Walls, 1 grenade and 2 medkits. Two players have 10 seconds to choose the weapon they want to use. Equipping and using the character’s skills is similar to other matches in Free Fire. The first person to defeat the opponent in 5 rounds will win.

Because the map of Lone Wolf mode is quite small but has many obstacles, you should choose strong weapons in close-range battles such as Vector, MP40, M1887…

In addition, if you are an experienced player, proficient in sniper shooting, the dual barrel FF AWM gun is perfect.

Although there are many large containers and obstacles in the middle of the map, you have a location in the spawn area, allowing you to observe where enemies appear. That means if they are not alert, you can kill the target right from the start of the match.

Free Fire OB31 will bring Lone Wolf into ranked mode. Therefore, this mode will become more and more difficult. However, don’t worry! If you know how to use the skills below, the battle in Lone Wolf is only a small matter.

Effect: When hit by bullets within a radius of 80m, your attacker will be marked (only you can see that mark). The first bullet fired on a marked enemy increases armor penetration.

Choosing the right skill is important to win in Lone Wolf. When you equip this skill, you can temporarily see enemy movements in Lone Wolf ranked mode. This is extremely important in aiming ahead and taking down the opponent.

Effect: Increase by 35 HP when the round starts.

In general, in modes like Lone Wolf or Clash Squad, Antonio’s skills are super useful. It allows you to have more HP per round, especially important in 1 vs 1 skirmishes. If 2 players use the same weapon with the same skill level, whoever has more HP wins. .

Impact: When using a gun, hitting an enemy will restore some HP to the user, knocking down the opponent helps you regain 20% of the character’s maximum HP.

Read moreCoin Master: How to run spins, get free spins every day

Jota’s abilities offer the same benefits as Antonio’s Gangster soul. It allows the user to gain some HP in battle. Moreover, if the battle formation is 2vs2, the 20% HP increase after each kill will lead you to another target immediately, instead of having to wait for the normal heal.

Above is everything you need to know about 1vs1 mode – Lone Wolf in Free Fire. Hope the article is useful to you.