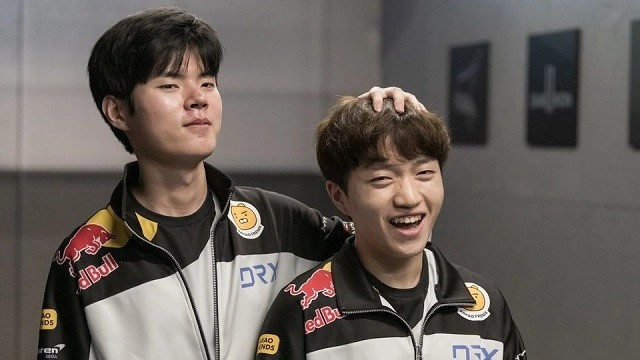 Looking back on his career, Deft simply wants to continue to dream

Looking back on his career, Deft simply wants to continue to dream

I used to wonder who Deft was.

You see, me and Deft are different. To me, he is an identity that I have created. He represents the ideal version of a player. He’s like a machine. When I’m disappointed in myself, when the results don’t go my way… I’ll become Deft, and I’ll push myself. I practice non-stop, scrim non-stop, solo queue non-stop. When I first started working, I used to follow that routine, and Deft took over my life almost entirely. I’m not Kim Hyeok-gyu anymore. I’m just Deft.

Lose yourself. I lost my kid who loved League of Legends.

And I miss that kid. That kid is so emotional. He’s not afraid to feel things. His mind wandered. That child dreamed. But Deft is very competitive. He has no feelings. And over time, this gap between the two gets bigger and bigger, and it gets bigger and bigger. It causes me a lot of stress and suffering. And that led me to those moments where I felt like giving up.

But I don’t need to tell you that I didn’t give up.

You know what happened this year.

I still don’t give up. I’m not done yet. I will be back next year.

I want to tell you why.

I can’t lie, when I saw EDG’s soldier respawn in that match… I just couldn’t believe it. I have never had to go through anything like this before in my career. I’ve seen clips on Youtube about the same thing. But for that to happen at Worlds, in the quarterfinals, against that team? I don’t know what to say or think. I asked myself “do I really not want to win?” But between that loss and the next, I realized it wasn’t just bad luck. That’s my fault. I could have done better to finish that game. It probably shouldn’t be. And in a way, that set me free. I didn’t feel bad, I felt empowered, and we played really well until the end. This may sound crazy but I almost knew we were going to win the series ever since.

And that day was also my birthday.

And usually, I just spend that day alone in my room after losing at Worlds. But this year I have to dedicate it to all my friends and fans in New York after we beat EDG. I remember standing on stage, watching everyone cheering for us, for me… and I thought, The world is so big, there are so many people – but today, I am the happiest.

I let myself feel. And although I did feel the gap between Deft and Hyeok-gyu narrowing more and more over the past few seasons, at that time, I felt that they had almost become one. I feel like there’s a balance between the two. And I feel that anything is possible for our team.

Against Gen.G in the semi-finals, I have full confidence in us. Our record against them for the year is not good. But it doesn’t matter to us. We are not on the same team. However, we know how good they are. And for me personally, I know them well. I’ve played with Chovy and Doran before. They are my friends.

That week in Atlanta, I realized this about my journey this year: I met all of the important people in my past. In a way, I’ve faced a lot of my own failures.

For example, in the regional qualifiers in September, I played against Rascal and Cuzz, whom I played with in Kingzone years ago. Then I met my friends at EDG in the quarterfinals where we always lost. And in the semi-finals, the same thing happened with Gen.G. A lot of these players have been with me for a long time. It’s hard to face them, but it feels important. I carried that feeling all the way to San Francisco.

I never went to the finals as a player, but in 2014 I went to support Samsung White in Seoul because I was wearing Samsung Blue. We lost to them in the semi-finals 3–0. And I remember how sad I was – how disappointed I was when I wasn’t the one standing on that stage. I think back to that moment a few weeks ago in San Francisco. Standing across from T1, listening to the raucous crowd at the opening ceremony… I thought, I’m here at last. I was a little emotional for a few seconds, but I reminded myself to calm down and focus.

My journey has brought me to one of my best friends: Min-seok. Even though I’ve only been playing with Keria for a year, she means a lot to me. In 2020, she will always say to me: I will make sure we win the world championship for you. And so, facing her in the finals… it was emotional. But we both know the deal. We have dreamed of this moment all our lives.

Maybe I dreamed a little longer.

When the game was over, I didn’t even realize we were going to win the world championship. It’s like any other moment – like I’m playing the game I’ve always played, doing what I’ve always done. But with the last few hits, I hear the crowd and I hear my teammates….

And I realized I was a world champion.

Even now I have a hard time explaining what it means. I feel pure joy. I know the happiness I feel is even greater because everything has come before. I’ve been wanting this moment so desperately for so long to finally get it – it means everything to me. I remember having a lot of days being disappointed with myself, not liking playing League of Legends, falling into an unhealthy vicious circle. And in the last few years, I’ve realized that I can take a breather. I am human. That helped me rekindle my passion. Now I understand that all the ups and downs in my career, the closes, the failures… all led me to this point. They made me the person I am today.

They made me a champion.

I know I wouldn’t have been able to say those words without my family, teammates, coaches and the entire staff.

When I was injured, when I felt exhausted – my friends, family and teammates were always there for me. No matter how much criticism I face, they always believe in me. All the texts I get when I get home from old teammates and friends, they just make my heart flutter.

And to my fans: Thank you very much.

It’s funny, when I’m playing well in my career, sometimes their support feels like a burden, to be honest. Like these expectations I had to meet. But when I’m not doing well, are they still there, still sending me positive messages and cheering me on? That’s what stopped me from giving up. We have all walked this path together. My journey is theirs – theirs is mine. I hope I make you proud.

And I hope I’ve shown some people that no matter what you’ve been through, no matter how difficult the road ahead is: Keep going. The difficulties you may encounter along the way will only make reaching your goal even more amazing.

And if I’m honest? This year is special…. I had the most fun in my whole life.

I found what I was looking for.

I have found myself.

And with gratitude, I want to stay and create more happy memories with my teammates and fans, to continue this journey. Now I can say that one day I will be able to leave League of Legends with no regrets.

But that day is not yet.