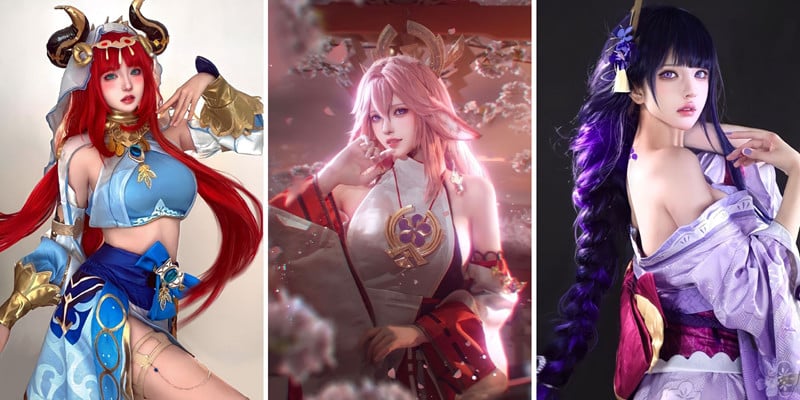 Before viewing the picture, invite you and Lag to learn a little about the coser that we will admire – 啊川 Azey.啊川 Azey is a Chinese female coser. This girl is quite private, so she doesn’t reveal anything about herself on social networks.

啊川_Azey is known as a coser who can transform into both female and male characters. Previously, Lag had an article where 啊川_Azey cosplayed as Sasuke, which you can see here:

The beautiful female coser transforms into a handsome man Sasuke: I can’t tell if this is a girl!

Recently, 啊川 Azey has attracted everyone’s attention thanks to the character cosplay photos in Genshin Impact. With her meticulous makeup and outfit, 啊川 Azey looks like a real-life version of the Raiden Shoguns, Yae Miko – so impressive! To know how this girl cosplays “well”, please take a look at the following series of photos with Lag

See more: Collection of Raider Shogun Genshin Impact NSFW figures: A bit pricey but worth it!

Above is a summary of Genshin Impact waifu cosplay images of female coser 啊川 Azey. How do you feel? Are the above pictures enough to satisfy you? Out of the Genshin Impact waifus, which character do you like the most? Leave a comment so we can chat together!