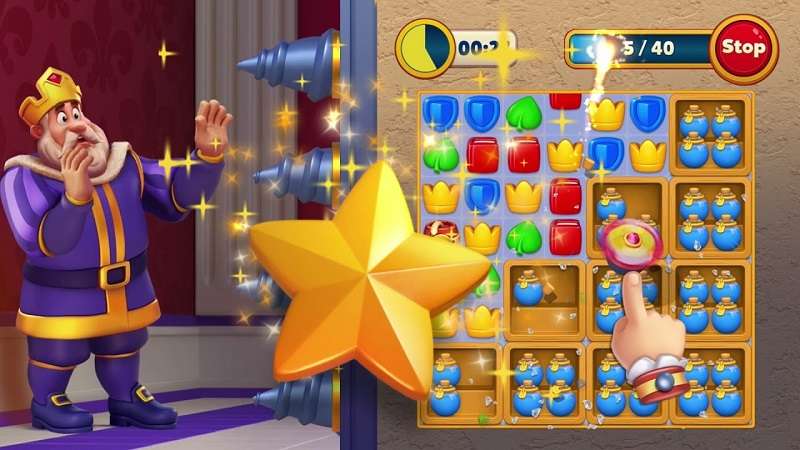 Game revenue continues to grow. Royal Match is a match-3 game that combines decorative gameplay, but is somewhat different from games with similar gameplay. The game has made many experience optimizations, such as simplifying the animation, improving the game’s “delay” and increasing the speed for gamers through the level. At the same time, in addition to the usual levels, there are also some special levels such as time limit, gold level, etc., which further expand the player’s playing experience.

Royal Match has a rapid growth.

Not long ago, the CEO of game developer Dream Games also said that the game “pays great attention to details in terms of art, programming and game mechanics”. The average playing time of players in the game is about 40-50 minutes, like watching a TV series. Thanks to that, this casual game has become famous since its launch in February 2021. In May of the same year, the game’s monthly sales exceeded US$10 million, and in August of the same year, monthly sales surpassed US$20 million.

As a match-3 game, in a highly competitive market, it is not easy to achieve such results in just one year. But this has been done with Royal Match, predicting the game will still maintain its rapid growth momentum. According to data over the past 30 days, Royal Match averages $1.49 million in daily sales and over 200,000 downloads per day. Among them, peak daily revenue is US$1.77 million, achieved on October 29, 2022, and peak daily download is 292,000, achieved on January 1, 2023.

According to data from a third-party watchdog, Royal Match becomes the fourth highest-grossing product in the global match-3 category in 2022, and the top three are Candy Crush Saga and Dream Home across the board. ratings. In December, Royal Match surpassed Playrix’s Dreamland and Candy Crush Saga, second only to King’s Candy Crush Saga, to become the second highest grossing match 3 game in the world.

According to data from AppMagic cited by foreign media, Royal Match’s ranking of downloads in the US market rose from number 115 in November to number 62 in December, surpassing the peak of 94 in March of this year. 2021.

Turkey-based Dream Games has skyrocketed in value. In 2019, Dream Games was officially established in China and received a huge amount of finance right after its establishment. In June of the same year, they received a grant of US$155 million, and in January 2022, Dream Games received a grant of US$255 million. The current value of the company has reached 2.75 billion US dollars. As funding grew, Dream Games began trying to expand the game’s promotion by launching a TV ad that reportedly reached over 186 million people in the United States with over 2 billion impressions in its first campaign. first.