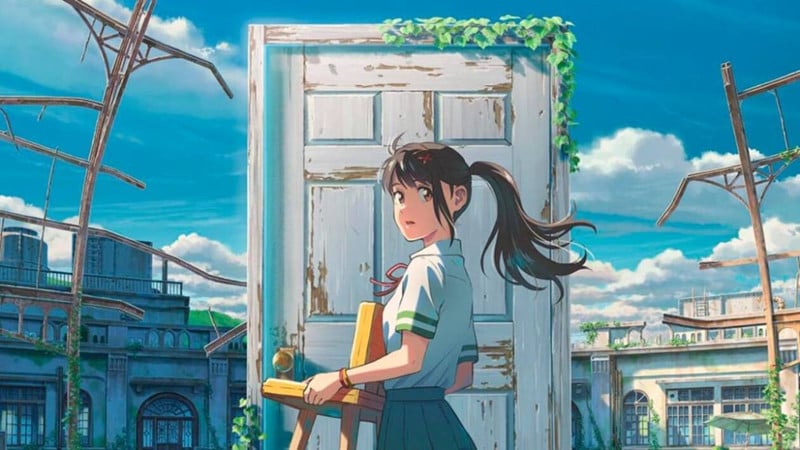 As planned, Suzume No Tojimari will break through the Japanese box office by the end of 2022 and then move to the Asian market before 2023. Details are as follows:

What is Suzume No Tojimari?

Suzume No Tojimari is the latest anime movie of “sad witch” Shinkai Makoto. The film is made by CoMix Wave Films and Story Inc and distributed by TOHO.

Suzume No Tojimari follows Suzume, a 17-year-old schoolgirl living in the Kyushu countryside. One day, Suzume met a guy and went with him to search for the “door”. Suzume luckily found it. She reached out to open the door and accidentally got the whole of Japan entangled in an unexpected event.

To talk about Suzume No Tojimari, author Shinkai Makoto shared that this will be a modern adventure story with an element of “travel”. He hopes this work will not make people sad like 5cm/s or Garden of Words. Instead, the audience will leave the theater with satisfied faces and refreshed spirits.

As planned, Suzume No Tojimari will hit Japanese theaters on November 11, 2022 – a very “special” day. The promotional plans for the film will be made soon in the near future.

According to the latest information, Suzume No Tojimari will have its own novel version, scheduled for release on August 24 (most likely 2023). This is quite familiar with the works of director Shinkai Makoto when almost all of his film titles have been turned into novels and manga.

When will Suzume No Tojimari premiere in Vietnam?

Based on the information Lag.vn Collected, Suzume No Tojimari will be released in Asian countries – including Vietnam – in early 2023 (sooner will be December 2022). This time is considered quite early when we only have to wait 1-2 months after the movie hits Japanese theaters.

Other markets will see Suzume No Tojimari in early 2023. Crunchyroll will distribute the film in North America and with Sony Pictures Entertainment in South America, Australia, the Middle East, Africa and Europe.

Above is the latest information about Suzume No Tojimari and the movie’s release time. In the near future, Lag.vn will add new content about the movie, so please keep an eye on it.