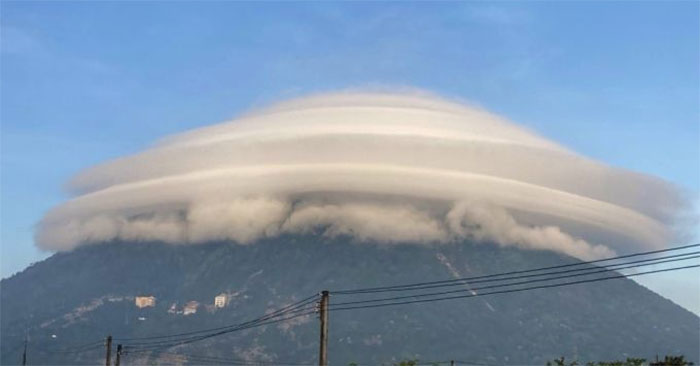 Lenticular clouds are stationary clouds that form in the troposphere in the shape of a disc or UFO that often occur along high mountain ranges and in lees on mountain slopes.

Lenticular clouds are an extremely rare natural phenomenon that occurs when a steady stream of hot, humid air moves over a high mountain.

At the top of the mountain, the hot, humid air is cooled and can reach the dew point, causing water vapor to condense to form clouds. Meanwhile the mountain acts as an obstruction that interrupts the air flow and creates vortex motion. This allows lenticular clouds to form.

In conditions of continuous and stable air movement, clouds are almost stationary and swirl in place.

The lenticular clouds have a strange shape of fluffy, cascading cotton, so many times they are confused with flying saucers. The clouds do not move, sometimes layered creating a wonderful landscape of nature.

This type of cloud is thought to be one of the common explanations for the appearance of UFOs in many parts of the world.

Why avoid flying near lenticular clouds?

Because the wind associated with these clouds is so strong and upward, it can cause serious instability in flight. Therefore, pilots often try to avoid flying in areas near lenticular clouds.